Bond: I admire your courage, Miss... 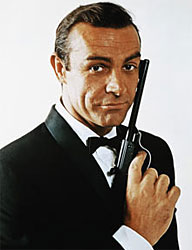 This baccarat expert is not real but he is the most popular and world-famous baccarat player in the history of this game: James Bond, the well-known movie character and the image of Ian Fleming who has given a birth to the fabulous Agent 007 is more and more often described as a passionate baccarat player and a real expert of this casino game.

If you watched all James Bond pictures attentively you should have noticed the fact he liked playing casinos very much: a lot of movies described James Bond as an admirer of poker (Texas Hold'em in particular) but his real game of passion was baccarat.

As opposed to many other movie characters, James Bond can boast with a quite detailed biography: each side of his life (birth, parents, education, work, habits, likes and dislikes, relations with women etc.) are described in Ian Fleming's books and screened by films directors and producers.

So, nothing will be hidden from real fans of Agent 007: his role had been played by many Hollywood actors but the most noticeable and memorable "James Bond" was Sean Connery; the image of this character is associated mostly with this actor today.

James Bond is the secret agent of the British Secret Intelligence Service (it is known as MI6 in all movies); his secret name is Agent 007 and it had become a common noun already: all spies and reticent people are called to be "james bonds" or "agent 007" today.

James Bond and the way he plays baccarat are possible to observe in movies (though you are welcome to read about him in Ian Fleming's books of course). The most popular film about James Bond which shows him as a baccarat player is Casino Royale (1967): the whole plot is devoted to this casino game actually.

James Bond, as a baccarat expert and admirer, is also possible to meet in such movies as: