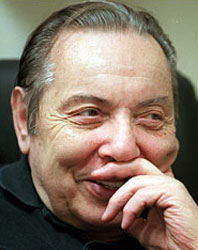 Lyle Stuart's name is one of the most notorious ones in the world of baccarat: he is not only a wonderful baccarat player who had won two baccarat tournaments but also a writer and one of the most controversial publishers who was not afraid to publish books which were prohibited and other publishers refused to work with.

Lyle Stuart is known as the author of Lyle Stuart on Baccarat where he described his personal experience as a gambler and a participant of baccarat tournaments. His books are very interesting to read because you will not find there any boring descriptions of systems or strategies, you will not find there any charts or graphics - the author writes about the game in an exciting way because baccarat was his real passion and the style of his life.

Lyle Stuart's real name is Lionel Simon; he was born is 1922 in New York and had a wonderful life full of events: he did not finish school and went to Merchant Marine, served in the Air Transport Command and worked at the International News Service and other publication before becoming the independent publisher with his own publishing house.

Mr. Stuart always believed that people should have a right and opportunity to see and read what they want, and that is why he always protected freedom of the press; he was not afraid to publish books which described political and sex scandals and other publishers refused to work with.

Lyle Stuart was also a part owner of Aladdin Hotel & Casino (Las Vegas) and he always tried to help casinos to protect themselves from various cheaters; he was a very friendly person who had a lot of friends both in gambling world and his personal life.

This wonderful person died in 2006 because of heart attack; Lyle Stuart was 83 and he lived in New Jersey. He was the owner of Lyle Stuart Inc. first, and later - Barricade Books. His achievements for the world of gambling are difficult to overestimate.

Lyle Stuart was married twice: his first wife, Mary Louise, died in 1969 and Lyle remarried in 1982 with Carole Livingston. He has two kids from his first marriage - a son Rory John and a daughter Sandra Lee, a stepdaughter Jennifer Kern and 3 step grandchildren.

Mr. Stuart is known as the author of such books as

But his publishing house is also known as the one who helped such controversial books as The Anarchist Cookbook and Du Pont Dynasty: Behind the Nylon Curtain to see the light.