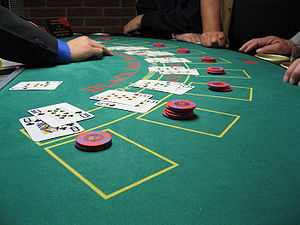 Blackjack tournaments are a new and exciting level of the game. The tournament allows you to play not against the dealer but to play against other players. This adds more excitement but as well makes the game much harder and adds a whole new chapter to game’s strategy.

Even if you are an experienced one on one blackjack player, before you begin to play in the tournament you need to understand blackjack tournament’s conditions.

At the beginning of the tournaments all players are separated by the tables. Each tournament separated for several rounds depending on the number of players. All players have the same amount of credits, so the only thing that matters here is player’s skills. At each table players play for an estimated amount of time. When the time is up the player with the most amount of chips is declared as a winner of the table. This player will continue the game in the next round with other winners. At the final round 6,7 finalists will contest for the prize.

To enter such a tournament players need to pay an entry fee. The most part of entry fee from all players will be the prizes for the winners. Check the casino in which you are registered for such kind of tournaments.

Very important to trace how much money your opponents have, especially the leader - for you to catch him up. If you are the leader it would be better for you to place the same bets as the opponents that try to catch you up. The leader has no time to rest. The leader can lose at the very last minute of the round just by making the wrong bet, and the last player can become the leader just by making proper last bet! So the best you can do is to be the last one to bet in the last game of the round. It can give you an advantage.

Some casinos offer kind of chip tournaments with an entry amount of only 50$. This kind of tournaments allows rookies to try themselves before wasting really big amounts of money on big tournaments. Also there are online tournaments in casinos online, which are growing very popular these days.